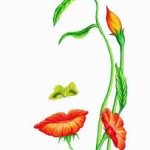 The famous folktale of Musa Khan- Gulmakai is perhaps the first known reference to this name. In Afghanistan, it is more common female name, especially amongst nomads. The common perception amongst Pashto speakers is that Makai is a flower. Pakistani Pashtoons, readily accept the Punjabi word Makai which means corn to be the source of this name. Hence Malala Yousafzai also believed that her pen name meant corn flower.
There are two problems with this perception. Firstly, the corn (Jawar or maize) grown in India is not the same corn grain, as in Europe. Secondly, Corn flower is a purple/blue flower which some gardeners consider as weed. This plant has nothing to do with any corn grain at all.
The word gul (flower) is given to both boys and girls as part of their name even now. For example, Chaista Gul which means beautiful flower for boys and Gul Panra (a petal of flower) Parri Gul (flower fairy) for girls and so on.
In order to find the meaning of the word Makai, we have to look in the Pashto poetry. An adjective “pai makhay” is commonly used to describe those with a fair face. Pai in Pashto means the milk (Shauda or Sheeday)
The word Makh is similar to the Sanskrit word Mukh which means the face. Mukkha in Pashto also means, facing, Aim and Objective. In Swabi the game of Archery is known, Makkha Vishtal (hitting the aim).
In Pashto poetry, there are other similes to describe the white or fair face of the beloved like, Parri makhe (fairy face) and Spojmai makhe (moon face) etc.
So, Gul Makhe (flower face) became Gul Makai at some point in time.
Published on 20th August 2014