The news spread that an American delegation is coming to our camp. There was an unknown excitement felt around and suddenly all the men and children were heading towards one direction.

My heart leapt and I felt electric shocks in my body. I jumped on my feet and headed out, but turned back with the same speed and went to the mud oven built in one corner of the courtyard.

My God this is the best time, the right moment and God given opportunity to complain to them. Yes! Yes! I was thinking fast, this is the day to open my heart to these Americans. I wanted to shout and let the whole world listen to our sufferings.

For the past few months, what I was eating as bread couldn’t have been called bread by anyone in this world. It did not look like bread; it didn’t even taste like bread. What we were having was something looked round, dark brown almost black, stringy with sand particles in it which would fight with your teeth when you chewed it.

The bread was made of wheat which was distributed by some agency who bought it with American money, so we heard. But we have been given stale wheat and bread made with that wheat gave many of my friends constipation.

Everyone talked about this wheat, but we had no choice. This was the only food we had and some people thought we should be thankful. But this was not the point. The point was why and who is responsible. Probably Americans! Yes! I must ask this question from the Americans who were visiting our camp.

With all my anxiety, I picked one bread from the lot which were being baked for Lunch, and looked for my Pattoo. Then I felt embarrassed… just in case somebody sees it and laughs at me… just in case my rivals are also there.

Then I hesitated and felt like leaving the bread at home and go without it. But I needed evidence and without the bread how would the Americans know what I am talking about. I was reluctant but then I couldn’t help and wrapped the bread tightly in my Patto so that it was not visible and walked towards the wheat distribution centre.

This centre was called Commandry and the head of this centre, of course, was not a commander but a Babu Sahib. I saw the same faces in that centre, that I am not very fond of, the same trousers and hats, you know whom I mean. There was high security around and the delegation was already there. A lot of people were swamping around them like bees and I couldn’t see what they looked like.

I forced myself in the crowed, made my way through by pushing a few and kicking the others and finally got through to the foreigners. I was a bit disappointed, because there was only one white face. The rest of the delegation had faces like mine.

Anyway what I saw was reassuring. This White man looked proud like a prince and was sitting in a relaxed mood, listening to a brown man whose hair was smeared with oil and he was the one interpreting whatever the villagers were saying to him. My heart sank because the brown man was not known to me.

Suddenly my spirits were raised as I saw my teacher’s son standing behind the foreigner. I knew that he could speak English because he was attending the English classes for some times, but the best thing for me was that he was standing right behind the white man.

I took out my bread from the Pattoo, and with my eyes, beckoned the teacher’s son to plead on my behalf. He replied back the same way tilting his head slightly and rolling his eyes as if to tell me that everyone was not allowed to speak to the white man. A few moments passed between the two of us asking and replying discreetly, but at that moment perhaps the foreigner saw my movements. I certainly felt it was my lucky day because the white man pointed his finger at me and said something to his interpreter in English. The interpreter asked me what I wanted to say.

I complained… and in one long sentence said what was on everybody’s mind. I raised my hand with the black bread in it and pointed with the left hand in order to emphasise my point. The interpreter translated what I said and I was very pleased that my complain was heard by the white man.

My hopes elevated, and I told my self, I will not have to put up with the stale blackened bread anymore. The white man looked pleased; he smiled and started thanking me. I was suspicious why he was thankful. I got confused and became more and more miserable as the delegation members left their seats and everyone started dispersing. The delegation seemed to be leaving and I did not have any reply, let alone any reassurance about the bread. I did not need thanks, I wanted some action, I wanted an answer, a reply.

My bread was totally ignored by everyone, including the white man. When they left, I asked the teacher’s son what was said to the white man that he smiled and then thanked me. The teacher’s son also smiled and said “He was told that the Afghans are very hospitable nation and this man (myself ) wants to invite you to a meal. Because he does not speak English, that’s why he brought this bread with him to make you understand.” I sighed and walked home. 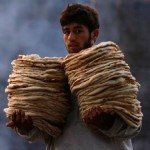