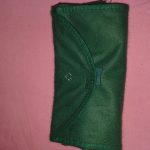 I had it for years now. The green cloth bag came from a health food shop. It was not my first or last reusable bag. I always had one, foldable and easy to carry in my coat pocket.
In my childhood we got spices and other small food items in brown paper bags. Sometimes there were old newspaper bags as well. For big food items like flour sugar and vegetables or fruit, there were cloth bags. My mother always stitched bags of all sizes from rags. There were separate bags for each item, hung near the kitchen on a hook.
She even had a cloth bag for left over bread. She did that because bread pieces attracted ants and other creepers. Occasionally, my grandmother would empty that bag in a jute sack to take to the village. All that dry bread was used as cattle fodder or chicken feed.
The first cultural shock for me in the UK was, nothing was recycled. Plastic bags, bottles, packaging cardboard all went in to Black Plastic sacks collected weekly by the Council lorry.
My friends laughed at me when I neatly folded a plastic bag to be reused. I was never keen on bringing my shopping in dozens of plastic bags which accumulated and later thrown. I always kept one in my handbag. Every time I took out my own bag from the pocket, in a market, the till assistant gave me funny looks, some even sniggered.
It seems ages ago and then by the end of 20th Century, all the fuss began about environment. The councils started with wheeli bins and green tubs to recycle glass and cardboard. Then came the brown and blue and black bins for organic and other waste to be recycled.
After 30 years of my life in the UK, Shop assistant started asking at the till if I needed a bag. My green bag is with me for a number of years now. I took it to a few foreign countries as well. Its handle came off one time and I had to stich it. I wash it frequently but is quite sturdy.
One day I went out in the rain and while opening the umbrella, dropped the green bag somewhere near the bus stop. I was so upset that coming back from the market, started looking for the bag on side roads. Usually people put the dropped items like gloves or hats on a wall to be picked by the owner. I was expecting that some good sould would have done it. But the bag disappeared. I came home and felt as if an old friend had died.
The bus stop is in front of a green grocer where I buy fruit or nuts. So I went the next day and enquired the chap. He said, someone had put a bag in the bin next to the bus timetable. I decided to check the bin and guess what? Strange things do happen. My bag was visible under a pizza cardboard box. I thought to myself that in the last 24 hours only one person had used the bin by the road. Is this the end of a civilized country? I pulled my green bag from the bin, which was soiled with yesterday’s rain.
After washing and ironing the bag, it went to its former glory. Yes. I am using it again.
Safia Haleem
5.6. 2018