In Buddhist monastic order a monk is not allowed to beg for food, only that what is put into his bowl or Kachkol which he carries. It is believed that the original alms bowl of Buddha in which he was offered rice after meditation and fasting was in Vaishali, a city of Bihar. He donated the bowl to Licchavis people before his death, who were following him everywhere. They went back and erected a Stupa to keep the bowl sacred.

There are several myths about this bowl which was venerated after his death for more than a thousand years. The relics of Budhha were enshrined in stupas all over India and mentioned in old manuscripts.
However, the alms bowl was always mentioned together with the sacred tooth relic because they were the symbols of state, the possession of which were vital to the kings. The bowl would be exhibited in public for the purpose of warding off misfortune that had struck a country.

At some point in time, the actual alms bowl was either lost or destroyed in wars and a symbol of it was carved out of stone. Typically the symbol was larger than life and heavy in order to prevent the thieves from stealing or taken by the invaders. The place where this bowl is kept is called “Patra-chaitya”.

Gandhara was the first region to start the tradition of making statues and stone sculptures from Buddha’s life. The story of the alms bowl was accurately carved in Gandhara sculptures. The Guardians of the Four Quarters of the world present the bowls to the Buddha. He holds it in his hand, either in a seating or standing position. Sometimes, it is placed on a throne under a canopy and the worshippers adore it.

From the first and second century AD under King Kanishka of the the Kushan dynasty, Peshawar was famous for its Buddhist sculptural traditions. He patronized Buddhism and the religious symbols associated with it. When the Chinese monk Fahian visited Gandhara in AD 400, he found the alms bowl in Peshawar being held in great veneration. He states that there were perhaps 700 priests who, at the approach of noon, used to bring out the Buddha’s alms bowl and with worshipers, made all kinds of offerings to it. They ate their mid-day meals afterwards. The alms bowl was glistening and bright. Its surface showed different colours, but mainly it was black. People used to throw flowers into it.

Fahian’s description shows that the bowl was probably kept in Gor Gathri. He described that it was of mixed colour but chiefly black, capable of holding two pecks or more (a dry measure of 5.7 litres). He says nothing about how the alms-bowl ended up in Gandhara.

The British Archaeologist George Cunningham is of the opinion that the Kushan king Kanishka (ruled 78-102 AD) invaded Magadha and took the alms-bowl to Peshawar. Another version is that the ruler of Varanasi offered it to Kanishka as a war indemnity.

In 520 AD, the Chinese pilgrims Sun Yung and Hui Seng visited Gandhara but did not mention anything about the bowl. It indicates that the bowl had been removed from Gandhara probably before the whole region fell to the Hepthalites.

There is historical evidence of the mass migration of people from Gandhara to the west who settled by the banks of the Arghanadab River in ancient Arachosia or present day Kandahar. When Hsüan Tsang visited Gandhara around AD 640 Harsha of Kanauj was the emperor of India. Gandhara was without a king and was ruled by a king of Kapisa in Afghanistan. Tsang had paid glowing tribute to the Great Stupa of Kanishka in his memoirs. He saw the ruins of the stupa of the patra of Buddha and stated that: “in traversing different countries, the alms bowl has now come to Persia.” Cunningham identifies this Persian bowl with the Kandahar bowl. He explains Hsüan Tsang’s statement by the fact that in his time Kandahar belonged to Persia.

Nobody knows for sure what happened to that famous Kachkol afterwards. Some British archeologists saw a large stone bowl in the Kandahar shrine of Sultan Wais and guessed that it was probably brought from Peshawar and may have been Buddha’s alms bowl. If that is the case the same bowl was brought from shrine by King Amanullah in the 20th Century and is kept in the National Museum of Kabul. However this bowl is carved from the outside with Arabic inscription, probably after Islam became a dominant religion in this area. The only clue to the old bowl is a carved Lotus in the middle of this bowl. 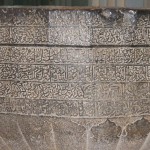 2. The Historical Interaction between the Buddhist and Islamic Cultures before the Mongol Empire
Alexander Berzin, 1996. lightly revised, January 2003, December 2006. p. 19.