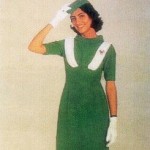 She was an ideal of the teen age girls in the 60s. We all wanted a picture of Momi Gul. Her smiling face on PIA calendars was everywhere; from small barber shops to the big banks and offices. Her white shalwar and dupatta with a green Qamees,white cuffs and collar was the height of fashion. She had a small green cap and white gloves as well. This was the uniform of an airhostess, a profession we heard about for the first time.
My best friend brought this picture, cut from previous year calendar and we would look at it hiding under the desks, fearing that the teachers will confiscate it.
It was May 1965 and we had our 7th class pre- summer holidays exams. I came home on 20th from school and saw everyone sad. A PIA plane crashed near Cairo and most passengers were dead. I did not pay much attention and prepared for another paper. Next day the whole school was talking about Momi Gul. She was also on that plane. I came home with heavy heart and saw a bundle of newspapers. My father bought all the papers when something big happened. We were looking at the photos of the wreckage and reading the details. It was an inaugural flight between Karachi, and London, carrying distinguished guests and journalists over a hundred passengers. The aircraft was planned to stop at Cairo. As it was on final approach to the Airport, the pilot reported problems with the flaps; shortly afterwards crashed and broke-up as it exploded into flames. Six of the passengers were thrown clear of the wreckage, but everyone else on board was killed.
I was heartbroken and wished that 27 years old Momi Gul was amongst the 6 survivors. One newspaper wrote that her family wanted her to get married and she promised that after returning from this journey, she will decide. It was her eternal journey to death.
One statement read, “Momi Durrani, a Pathan girl, tall and fair with film-star looks… When she smiled, she made others smile.”
The deceased passengers were buried in a graveyard in old Cairo near Al Imam Al Shafi mosque.
I kept all the pictures of Momi Gul from the newspapers in a file and one day when my best friend came, I showed them to her. She was envious but had a big heart and gave me her own Momi picture.
A few years later, the PIA changed the design of their hostess uniform. But Momi Gul was not forgotten. In early 70s, I went to a child’s first birthday. All the gifts were unwrapped after the cake was cut and in one box there was a doll in air hostess uniform, and everyone said, this is Momi Gul.
Time has passed and a few days ago, a link on the internet took me 50 years back to the plane crash. Her picture was captioned, ”Momi muskurati raihay gee.”(Momi will keep on smiling,”